Return of the Runelords 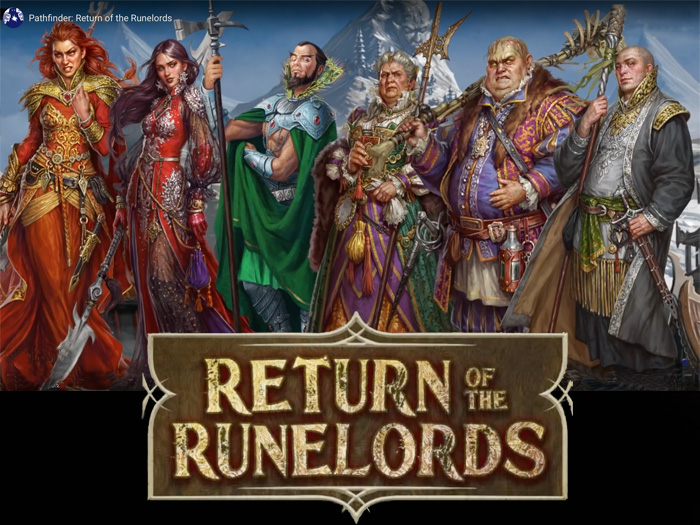 They’re back! And there is plenty of Pathfinder original adventure to keep you busy for a long time ahead. The all-powerful Runelords, near-immortal wizards who ruled Varisia in ancient days, stir to terrible life once more, surging across the frontier with plans to reignite their time-lost empire. Years ago, Pathfinder’s classic Rise of the Runelords campaign explored the return of just one of these terrible masters from the depths of time—now the rest of his scheming allies have returned, their brilliant minds turned solely to conquest!

Secrets of Roderic's Cove (1 of 6): The Return of the Runelords Adventure Path begins here, in the pine-shaded port town of Roderic's Cove, you stumble upon something larger than faction squabbles among the townsfolk—an ancient smoldering threat has flared to life. The powerful ancient wizards who once ruled this land are returning!

It Came from Hollow Mountain (2 of 6): The ancient runelords of Thassilon are awakening! The task of following up on these rumors falls to a new generation of heroes who must brave the dangers of Hollow Mountain, one of Varisia's most notorious ruins.

Runeplague (3 of 6):A nefarious plot to spread a magical plague through Varisia's greatest cities. As you travel the breadth and width of the land, you not only face cultists eager to transform people into monsters, but the spreading influence of other runelords as their agents stir to life.

The City Outside of Time (5 of 6): With the discovery that Runelord Alaznist has tampered with the past and set into motion devastating transformations of the timeline, the heroes must embark upon a truly dangerous and desperate gambit. Since historical texts and their own memories have been altered, the lore hidden within a time-trapped city may hold the only clues as to which events of the ancient past Alaznist has targeted.

Rise of New Thassilon (6 of 6): Varisia has been destroyed! Runelord Alaznist's alteration of the past has thrown the frontier nation into chaos, devastated cities, resurrected demon lords, and worse. The Runelord of Wrath is now primed to seize control of a ruined realm, so that she can remake it into a New Thassilon with herself as its furious queen. Only one desperate plan can set things right—a band of heroes must discover a method to travel back in time and repair the damage their enemy has wrought on history!