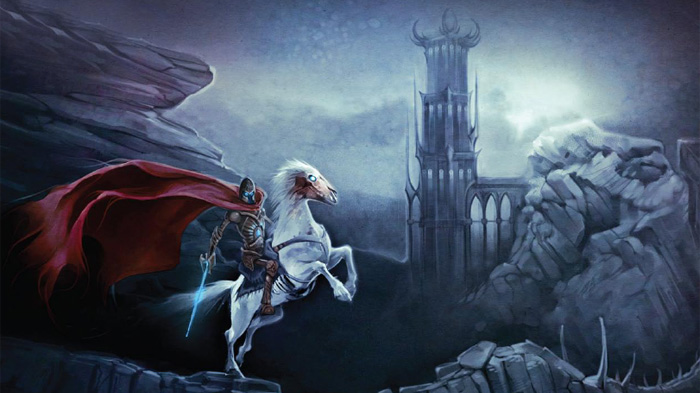 The tenth season of Pathfinder comes to a climax in this special multi-table event at PaizoCon UK. (Now confirmed by Paizo.) This is a multi-table interactive event for characters between 5 and 16 level. (So only level 7 Pre-Gens will be available as main PCs.) PFS 10-98: Siege of Gallowspire marks the finale of Season Ten. Expect a challenging adventures. Choose "Soldier" to take on this tough event, or choose "Champion" to take on extra hard mode. Good luck, Pathfinder.

PFS10-98: The Siege of Gallowspire

For a millennium, Golarion rested safe in the knowledge that history's most infamous lich, the Whispering Tyrant, was securely locked away. After a cataclysmic explosion sundered his prison, the Tyrant roams free once more. But he didn’t simply abandon his prison. Deep beneath the ground, behind nearly impenetrable magical wards, he has set in motion a necromantic ritual of extraordinary power. It's up to the Pathfinders to battle the Tyrant's guardians, break the wards, and stop the ritual that could make him unstoppable. Along the way, they’ll discover what secrets the Tyrant wanted to protect and keep from falling into his enemies' hands. In Siege of Gallowspire, the PCs confront the plots of one of Golarion's most infamous villains: the Whispering Tyrant. This ancient lich has begun a ritual that threatens to create new armies of undead to serve him, and it's up to the Pathfinder Society to stop the ritual before it's too late. The situation is serious enough that even the famously jolly Master of Swords Marcos Farabellus isn't smiling, illustrated below by Sebastian Gomez.

Challenge When it comes to challenge, Siege of Gallowspire has two difficulty modes. The first, Soldier, is a little bit harder than a typical special, but players also have more resources than normal to help them out. The second, Champion, is akin to the Hard Mode option that has been offered in past scenarios, offering an additional challenge for tables of players who prefer to face stronger foes.

Aid Characters: So how does this scenario include multiple PCs per player? Players bring one usual character, and they can also bring up to three of their other PCs to act as Aid Characters. Aid Characters are PCs of level 5–20 that have two roles. They create personalized Aid Tokens—special benefits that players can hand out to other tables after each encounter. Aid Characters can also participate in special Aid Missions during the scenario. Each Aid Mission is led by one of the Pathfinder Society's most famous venture-captains. These missions are dangerous, but they could have big payoffs! To use a PC as an Aid Character, you do not need all of their Chronicle sheets and papers. You just need the most recent Chronicle sheet that character has earned. If you don't have enough PCs to fill in your three Aid Character slots, that's OK too. You can use 4th-level pregenerated characters instead. They aren't as effective as your own PCs would be, but they can still participate in the story.
As the scenario involves the entirety of the Pathfinder Society, it is possible for a player to bring along up to 3 other characters to act as aid characters to the mission. These characters can be from 5th to 20th level. You just need to bring along their latest chronicle sheet (to show what level they are). The higher level they are, the more effective and helpful they can be. These aid characters will not be played in the scenario but they can assist in two ways. One they can ‘power-up’ aid tokens to give a table a boost (similar to how aid tokens worked in previous specials) but there is a risk of some harm befalling them. There is a chance of injury (8 pp to recover).
Secondly, aid characters will have opportunities during the scenario to go on aid missions which improve the successes for everyone. These missions are risky and can lead to aid characters being injured or even killed. However, they can also earn a boon from the aid mission. Aid characters are categorised as one of scout, muscle, guard, medic or spellcaster which will decide which aid mission they can do and what possible boon they receive. 4th level pregens will also be available for use as aid characters but they have far lower chances of success.

This year JenCon is forced to move online. It is open for player sign-ups. Warhorn